I'll have a slow Christmas, plates by the dozen and finally finishing this post... 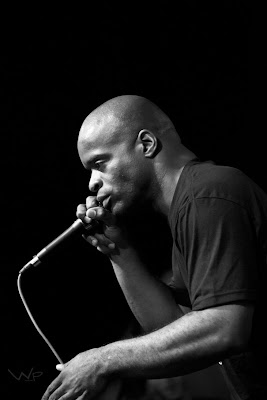 I'm not sure this guy has real vocal cords.  He may have had them removed in favor of a small speaker attached to a synthesizer in his brain.  That, however, is just a guess.  Check out some of his work (here) for a dose of aural delight.
Now there are other people out there who can do this, and maybe just as well, but I have never heard of them, so today you get Kenny Muhammad.

Editors Note:  This post was actually written last week (or two weeks ago maybe?), but I never got around to posting it.  Everything still applies...not that it makes it any more interesting or exciting.  Oh well.  Enjoy if you dare!

As far as studio news goes...not really a lot to report.  I have not been extremely busy lately.  Last week I was tied up with Thanksgiving related activities most of the week.  Now I have a freezer full of frozen pig!  Sorry to those folks who are not big on producing their own food or are put off by meat production.  I have nothing against you but, yeah for butchering!

This week I am working on getting stuff decorated for a final firing before Christmas.  I have a number of special orders that need to go out for the holiday.  That being said, I am not super busy like I am sure a lot of other people are.  I have not had a show in a little while so...out of sight out of mind which means fewer orders.  I wish it weren't so, but...oh well.

Actually I did have a show just this past weekend, but it was not a typical "set up your booth and hock your wares" kind of show.  It was a department store style show, so all I had to do was drop off my inventory and work a shift over the weekend.  Good in that I was not tied up all weekend.  Bad in that my work was intermingled with other work and I was not there to talk it up or anything.  Financially it was not a rousing success, but I may give it another shot next year to see how it shakes out.

It is terribly confusing and frustrating.  I usually get a very positive response to my work, whether it be at a show, online or wherever.  It seldom translates into much of anything in sales though.  I guess there cold be a few explanations for this.  A: My prices are just to high...but I have seen other folks' prices and I do not think that is the case.

This just in...I just, as I was typing, received notification that I got the bid on a large order I was shooting for.  Sweet!  This will hopefully go a long way to financing a new studio.

Ok, everything up until this point was written a while back and I really don't remember what I was saying or where I was  going with it, so...new content!

I got a big order for plates that will be used as awards early next year.  This means that over the next couple months I will be makes hundred, no thousands, no dozens of plates!  Time to go into mass production mode.  Thankfully this will be made easier by the plaster bats that I made a while back.  And really it is not the throwing that will be a harrowing experience.  Rather it will be decorating dozens of plates with the same design.  That is not how I usually work, so it will be an interesting experience.
I almost, almost got a new studio this past week.  A local company was having a sale on portable storage barns and I had my eye on a 12 x 24 foot one.  After checking it out a bit though, and not wanting to make a rushed decision (it was an auction type deal), I passed on it. Instead I will be working on plans for building a new studio next spring.  More on that as the story develops.

And since this post is stretching over a couple weeks and getting kind of long, I will wrap things up.  So long for now.
Posted by -Rob, Simple Circle Studios at 7:46 PM 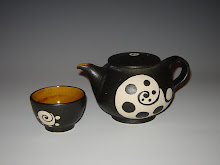